Recently, my friend asked me to participate in a rogain. What is a rogain you may be asking yourself — it’s essentially extreme orienteering; they give you points on a map with varying score values, a limited time, and tell you to get to as many as possible and have the highest point score at the end.

This rogain in particular was with the Victorian Rogaining Association, a group of varying age and tatlent weekend warriors who rogain. We were given a 15-hour or 24-hour option, it being our first rogaining experience we opted for the 15 hour competition. This meant that we can use any of the 15 hours between 12 noon on saturday and 12 noon on sunday that we desire. We laid out our course, agreed that we were going to get lost frequently, and took off at a jog for a whirlwind 15/24 hour period.

Our first point is supposed to come after we have passed all the buildings, we pass them and look for our turnoff — we don’t find it, instead we hit the next intersection. Uh oh, we already missed a point, but we decide to cut down to the stream on the map and make our way to our next point. We cut east and find our “waterflow” (we dubbed them “rivers”). There was no water in it.Â  In fact, it didn’t look like water had run their for some time. There was however large trees, fallen branches, ferns, and a steep hill on either side. We stick with the plan and make our way down the river to the river intersection where our first point will be located.Â  Several minutes into this plan, we have all fallen, got mad across most of what we were wearing and progressing slow.Â  It becomes clear this is going to be an interesting exercise.Â  We finally make it down to the point looking quite disheveled and somewhat annoyed at the amount of unnecessary time spent trailblazing without the apparently necessary machete. Some other groups eye us, their faces say they think our trip is going to be most interesting…

We make our way back out to the road and proceed as planned for several points, we make pretty good time. Aside from one minor detour where we misread the map, we’re doing pretty well. After our aforementioned adventure we revise some of our plans to travel by river and instead decide we might be better suited on trails or roads. This decision highlights one of the biggest tradeoffs in rogaining — when is it advantageous to shoot a bearing with a compass versus stick to established paths? Good question.

As we’re trudging through the forest we have some fantastic views, the path at some points is carved into the side of major ridges and provide beautiful glimpses of canyons and trees. Many trees in Australia shed their bark, which is very hard to adjust to; the trees get so smooth and bark is scattered across the whole forest, it’s definitely something that takes getting used to. There are several flipped cars throughout the forest, it provides an interesting contrast to the otherwise very natural feeling — it also begs the question as to how they got there? It might be tough to drive through sections of this forest..

We found a mine as we were walking along a ridge carved path as night fell. An open hallway in the side of a ridge is pretty spooky, we explored it only very briefly, as the clock was ticking and we wanted to push on. We decided we would try to one more point, 72, and take a shorter path nearby to bring us to the road and home.Â  This is where we learned how hard night navigating is, we wandered around the area where we thought it should be, finding a path that wasn’t on the map, rivers of course with no water, and the flow it was supposed to be on was quite hidden.Â  We stumbled upon the path on our last ditch effort before heading back.Â  We decided we’d skip as much of the night navigation as possible.Â  Our walk back had few points on it and was very long — by the time we made it back to the camp it was just shy of 10, leaving us 5 hours to work in the morning. We devour food and sleep for a few hours.

6:30. Time to get moving to be out by 7. We have varying paths for the day depending how ambitious we decide to be. We start off at a jog — we’re going big. By now we’ve gotten much better at reading the map and determining which paths are feasible, we still manage to overshoot one turn by a couple hundred meters, but we’re doing pretty well. After grabbing the points on our ambitious plan, we make it back to the hash house (base, food) a bit after 11, leaving us a bit less than an hour (late fee is 10 points/min, read: bad). We decide to finish with a bang, we drop our packs and run to grab the 46 point we missed yesterday (hah! take that!) and add on a 58 point a bit further down the road. We see people heading back as we’re going to grab our last point, we overshoot it mildly but keep our jog up and make it back with 9 minutes to spare.

We won the novice field, but it wasn’t exactly competitive. There was one other team doing the 15 hour competition, and 3 doing the 24 hour (but we think they required as part of a PE requirement or something, so they might not have been giving it their all…). It was a great time: a fun challenge with some friends and nice to be outside in this beautiful country. Using the extremely precise measurement of string based on the path I believe we took (highlighted in maps below, blue is first day, green is second) we did approximately 34km the first day and 27km the second, totally 61km or about 39 miles. 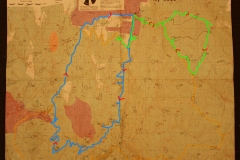