No, I am in fact not homeless.

My brother and I were about to go to Europe and I decided I needed some new sandals, I found my way to the Target store and found some I liked.Â  They looked similar to rainbows, were comfortable, and cost $10, needless to say I was sold. We depart on our adventure.

By the time we get to Rome, we’ve walked many a mile, primarily in sandals, and my left one has started to acquire a hole in the heel.Â  This is ridiculous, I just bought these, and they cost me a whole $10.Â  There is no way I’m throwing these out yet. So, I kept wearing them and the hole steadily grew.Â  They’ve traveled from Spain to London and to Paris and Rome, Las Vegas to the Grand Canyon, numerous trips to the beach, a vacation in Mexico, New York City, San Fransisco, Australia and New Zealand. Finally, it was time that they retired, in Australia they had acquired a new whole and the left one had grown to biblical proportions (maybe not). So they were ceremoniously replaced (not really) with a new pair at the end of my Australian experience.

The new ones are pretty typical australian — havaianas are everywhere there.Â  Hopefully this pair lasts as well as the one it replaces.. 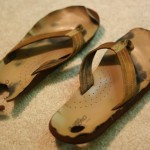 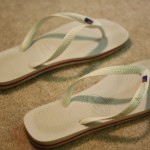 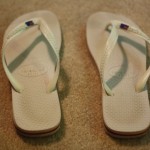 My dad came to visit Australia for my last ~2 weeks there.Â  I also had a final (on the last possible day over the course of a month, haha).

While he was here we were quite busy, he spent some time exploring Melbourne on his own, we also visited much of the city together. I was busy though for a few days preparing and taking my final, so our first real adventure was off to Sydney.Â  We stayed at the Mercantile Hotel, an Irish pub in the Rocks, and it was surprisingly nice. The bathrooms though shared were quite clean, and there seemed to be very few other guests which left a reasonably peaceful atmosphere — perhaps my favorite part though was the full Irish breakfast cooked for us complimentary every morning by simply walking down stairs.

We happened to arrive in Sydney and wander over to the Opera House atÂ  the perfect time.Â  An afternoon storm was brewing in the distance, but it provided a beautiful rainbow.Â  However, the rainbow transformed from a simple rainbow into a double rainbow.Â  Eventually the primary rainbow started to refract and make smaller copies of itself directly below.Â  It was a beautiful sight now, the impending rain was not as welcome.

We toured the Opera House, explored the botanical gardens, ate on the harbour, and went to the aquarium.Â  So, yes, it was a whirlwind of tourist activity, but was still a good time.Â  The aquarium was a pleasant surprise in that Spongebob Squarepants had come to visit (haha, no joke — look at the pictures). Of course the event attracted a sea (get it?) of school age children frantically running through the aquarium turned amusment park.

We were quickly on our way up north to Cairns, and the Great Barrier Reef. One of the first things at the time greeting us was the abundance of young, American, men invading the city.Â  Our taxi driver informed us that there was a visiting aircraft carrier and other ship, in port to celebrate the 4th of july. The town was overrun. We grabbed some souvlaki (which is incredibly common in Australia — Melbourne has the second highest greek population in a city to Athens, no other Greek city) our first night and relaxed for awhile. The next day we visit this aboriginal village via gondola.Â  This had tourist trap written all over it — private shuttles taking you directly there, high entrance prices, and a village far enough away it would deem itself its own price haven. However, I was pleasantly surprised that it was not as bad as I had feared. Sure it was really touristy, but somehow manageable.

We also had an opportunity to go to a sanctuary to see some Australian animals. My dad had been asking about seeing kangaroos, which I realized had already lost its novelty after living in a country where they are generally regarded only slightly higher than rodents (though, when you hit these rodents you total your car). The kangaroo highlights an integral part of what it is to be Australian — a conflict of image, that pride can be derived for a range of reasons.Â  Vegemite is adored as a truly Australian food and less for its culinary magic.Â  The story of ANZAC heroes is one of tragically poor UK-led military management. Stories of the outback, the bush, and nature, are often ones of death, of a complete lifecycle, of people being the land.Â  Some of these were covered in one of my Australian classes — it provided an interesting view of Australia.

But, I digress.. We were at a sanctuary — I got to hold a koala! And hand feed wallabies (mini kangaroos)! Koala’s have claws because they have to dig into trees, but I wasn’t really thinking about that, until it grabbed onto my skin and kept grabbing harder.. Finally, he was adjusted.Â  It was quite relaxed and content sitting there for a long time. Apparently they’re marsupials and not bears as is often assumed..

We later made it out to snorkel at the Great Barrier Reef.Â  Snorkeling at the reef, the only living structure visible from space, should be of epic proportions.Â  It was pretty awesome, but probably not as mind blowing as one might think, it’s almost impossible to see large, varying sections of reef in a short amount of time simply because it is so large.Â  The coral seemed substantially less colorful than the fish which were the most colorful I had ever seen.Â  I was blown away by this bright blue star fish just hanging out, it was pretty wild.

We hung out on the beach, headed back to Melbourne and explored there a little more before heading stateside.Â  The flight back was pretty rough.Â  I didn’t get out of my chair on the long 15 hour segment because I was afraid my legs would get used to movement and then hate sitting again… United, commonly referred to as companions of the devil, treated me reasonably, all my flights were on time, and my flight was the cheapest option.Â  Our in-flight entertainment was dreadful (no, I couldn’t choose, yes I know how awesome that is), but I survived. 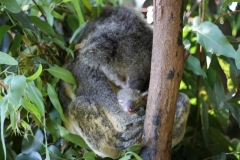