Over Easter Break I went to New Zealand with a group of 13 students. Most of us live together and we were all Americans or Canadians who wanted to see New Zealand.

New Zealand is divided into two islands, the North and South. The South island is where most of the tourist action is, extreme sports and beautiful scenery mostly.Â  New Zealand, now famous for the stunning filming location of the Lord of the Rings movies is a beautiful country. We ended up driving most of the island tallying up roughly 3200km (~2000 miles) over the course of a week.

Driving on the “wrong” side of the road is certainly interesting as first but you quickly get used to it, the weirdest part is that some cars have windshield wipers/turn signals reversed (ours did) and that was definitely interesting getting used to. I wish I had a motorcycle or high end sports car, as these would be the vehicles needed to do the roads justice.

Our week was a fun filled road trip, we split our nights between camping and hosteling. The stars are amazing, the Southern Cross (the stars on the Aussie flag) are so easily spotted amongst a sky absolutely busting with stars.

Milford Sound is one of the most beautiful places (the album image below is from there) I’ve ever been. Mt. Cook, one of the famous mountains was beautiful as the backdrop to lakes. Even shooting with a DSLR, the pictures can’t do the beauty justice. Driving through the mountains and gazing on the sites with your own eyes is … undescribable.

Queenstown is the extreme sports center of the island.Â  We had Mario Kart style luge races (ski lift-esque picture) with 13 of us bashing into each other barreling down a mountain. Flips, blood, sweat, and tears were left out there. Well, maybe not tears. It was a great way to spend an afternoon with friends. I got to go horseback riding for the first time in awhile which was really great essentially cantering through the fields of Rohan. Our guide realized that two of us knew how to ride and gave us decent free reign. Our group ended up fording a river that was probably ~4 feet deep, it was quite an adventure and a great time.

We then headed to Franz Josef glacier where we had quite a journey determined to touch the glacier. Despite a rainy day, and countless warning signs, a small group of us decided to stop at no less than touching the glacier. Our trek involved hiking up a waterfall, around ridges, and countless slips. We scared several tour groups by our motley crew appearance… Perhaps it’s a story better told in person…

We eventually made it to the north side of the island where most of us went skydiving. Wow. It’s quite an experience, it’s a pretty interesting feeling knowing you’re about to jump out of a functional plane. It was a pretty wild experience, and not actually as terrifying as I had thought it might be.

It was a great trip, it was wrapped up in appropriate fashion when I had a plane that landed at 8:00AM Melbourne time (NZ is +2 from Melbourne) and an exam at 9, I flew through customs grabbed my bag hailed a cab and cruised into the lecture hall just as my one exam of the semester was starting. 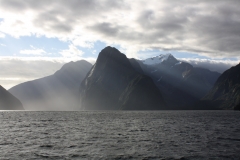