I just got an email in my gmail account from Grand Central about upgrading to Google Voice.Â  I just performed the upgrade and I’m pretty excited about the new features offered by Google Voice.

Grand Central for those who don’t know was a service (bought by google) that provides a single phone number for you, ideally for your whole life. As you move houses or trade cell phones, you can just keep giving people one number to call.Â  The service had more functionality, such as the ability to ring multiple phones (home and cell), and lots of filtering. They’ve also updated the theme to closely match other Google applications.

Google Voice increases the functionality even further, you can now make outbound calls, send and receive SMS messages, voicemail transcripts, and conference calling among others.Â  I’m glad to see they are finally working on this service again as I have had limited use of my account for some of the reasons just mentioned.

Privacy could be a concern, their privacy policy swears they’re not evil. Who knows, maybe they’ll sell add space based on my voicemail transcripts? For now at least the trade off seems worth it, the governments always listening anyway right? Might as well benefit 😛

I think the service is still invite only, so if you’re looking for an invite you can leave a comment, if I ever get any, I’ll pass them along. I have no idea if I will. 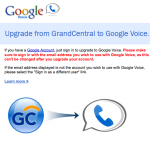 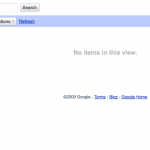