I realized that I never posted about the Inuaguration of President Barack Obama (44). I went downtown for the event which was amazing that so many people had gathered, I think the crowd estimates were ~1.5 million people. Wow.

It was funny being in the city when everyone was a tourist and had no idea where anything was, I helped people on several occasions, and there were some funny moments.Â  (It’s by Ballston… Response: Boston? No, were in DC?)

Leaving DC after the inauguration was over felt oddly similar to an apocalyptic film, like Cloverfield or something.Â  There were military humvees and guards every few blocks, the steets were closed to traffic, and the metro stations were completely swamped (see pic). We ended up leaving by walking (!!) across the Memorial bridge.

It was quite an experience and amazing seeing DC in a way like never before. That everything seemed to go so relatively smoothly was incredible, regardless of ones political views, going to the inauguration was an experience in itself, things with this sheer number of people don’t happen that often. 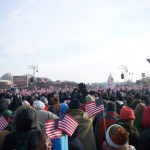 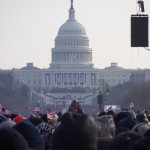 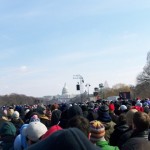 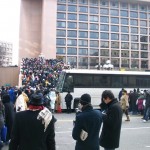